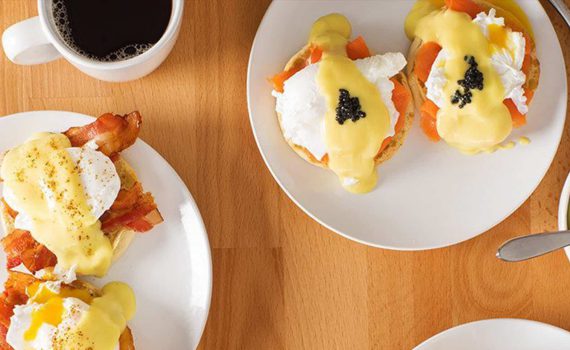 Start your holiday right with this customizable version of a classic. Did you know that eggs benedict originated in New York?

1.) PREHEAT oven to 350°F. ADD 1 Tbsp. water to each cup of a 12-cup muffin pan. CRACK egg into each cup. BAKE for 10 to 12 minutes or until egg whites are set but yolks are still runny or until desired doneness. COOL for 1 minute. REMOVE each egg using slotted spoon and PLACE on paper towel-lined plate to drain.

2.) HOLLANDAISE: WHISK egg yolks, water and lemon juice in small saucepan until blended. COOK over very low heat, stirring constantly until mixture bubbles at the edges. STIR in butter, one piece at a time, until butter is melted and sauce is thickened. REMOVE from heat immediately. STIR in salt, paprika and pepper. 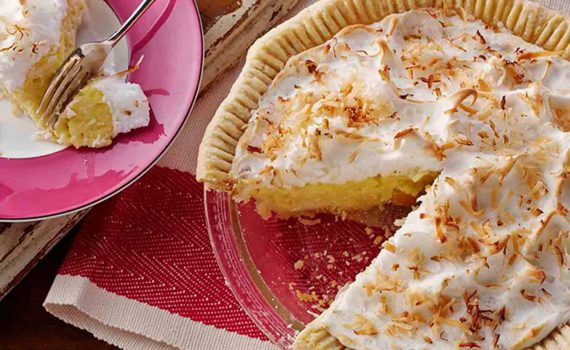 2.) BEAT egg whites and cream of tartar in mixer bowl with whisk attachment on high speed until foamy. Beating constantly, ADD sugar, 1 Tbsp. at a time, beating after each addition until sugar is dissolved before adding the next. Continue beating until whites are glossy and stand in soft peaks. Beating constantly, ADD corn starch paste, 1 to 2 Tbsp. at a time. BEAT in vanilla.

POUR hot filling into pie crust. Quickly SPREAD meringue evenly over filling, starting at edge and sealing to crust all around; swirl with back of spoon. SPRINKLE with 1/4 cup coconut. BAKE in upper third of 325°F oven until lightly browned, 16 to 18 minutes. Cool on wire rack 1 hour, then refrigerate 3 to 4 hours before serving.

— What’s a soft peak? To check for soft peaks, stop the mixer and lift the beater. The peaks left in the meringue should curl at the tips. If the peaks stand straight and tall (stiff peaks), the meringue has been overbeaten.

— Anchor the meringue. Be sure to attach the meringue to the crust all around the edge of the pie. This prevents the meringue from pulling away from the edge during baking. 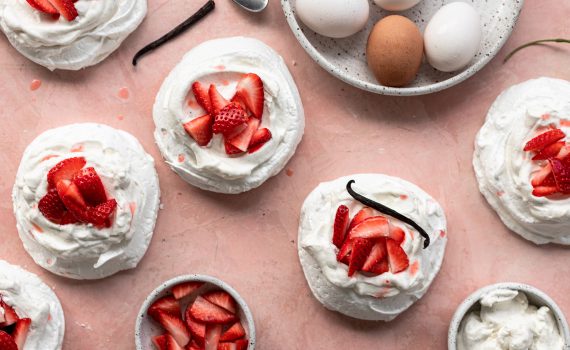 1.) Preheat oven to 200˚ F. Spread the sugar evenly on a parchment lined baking sheet and bake in the oven for 5-7 minutes to slightly heat. Remove the sugar from the oven, then raise the oven temperature to 225°F.

2.) Carefully separate the egg whites from the yolks. If even a little bit of egg yolk gets into your mixing bowl, the whites won’t whip. In the bowl of a hand or stand mixer fitted with the whip attachment whisk the egg whites on low- medium speed until foamy. About 1 minute.

3.) Slowly start adding the sugar, 2-3 tbsp at a time and mix on medium speed for 2 minutes in between each addition. The sugar needs to be completely mixed in to the egg whites to ensure recipe success. Do not rush the process. You can check that the sugar has been mixed in by squeezing some meringue between your fingers. If it does not feel gritty, it is ready. If it feels gritty continue mixing on medium until mixed through.

4.) When all of the sugar has been mixed in, add in the cream of tartar, vanilla extract, and corn starch. Raise to high speed and beat until stiff peaks form.

5.) On 2 parchment paper lined baking sheets, pipe or spread the meringue with a spoon into 6, 4 inch circular “nests”.

6.) Bake for 1 hour and 15 minutes. Then turn off the oven and let the meringues cool down inside. Do not open the door for at least 4 hours. You can also let them cool overnight.

INGREDIENTS – For the Garnish:

DIRECTIONS – For the Garnish:

1.) When ready to serve, whip 1 cup of heavy whipping cream on medium speed in a clean mixing bowl fitted with the whip attachment. Slowly add in the sugar and the vanilla (extract, or seeds). Continue mixing on high speed until stiff peaks form. About 2-3 minutes.

2.) Dollop the whip cream on the meringue nests and top with sliced strawberries.

This recipe is best assembled and served the day of.