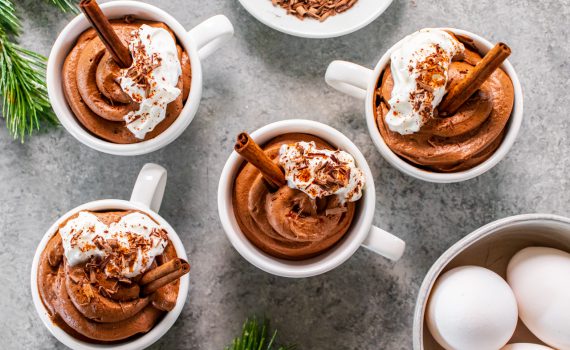 Bring an egg’citing twist to a holiday staple with this hot chocolate mousse. This festive recipe features cinnamon, spice, and everything nice… with a kick of cayenne for good measure!

1.) In a medium mixing bowl, use an electric hand mixer to whip together egg yolks and granulated sugar on high speed until pale and fluffy, about 2 minutes.

2.) Heat 3/4 cup of the heavy cream and salt in a saucepan on the stovetop over low heat until hot but not boiling, about 3 minutes. Whisk egg mixture constantly while slowly pouring in warm cream mixture to temper egg yolks. Pour mixture back into the saucepan. Cook over low heat, whisking constantly, until mixture thickens slightly and reaches 160ºF on an instant read thermometer, about 3-5 minutes.

3.) Strain egg mixture into a clean bowl through a fine mesh strainer. Immediately stir in chopped chocolate, vanilla, cinnamon, chili powder and cayenne pepper until chocolate is melted. Transfer to the refrigerator for 30 minutes.

5.) Pipe or spoon into small 4 oz. dessert cups or mugs. Chill for 1-2 hours. Top with whipped cream and garnish with shaved chocolate, cinnamon and chili powder.