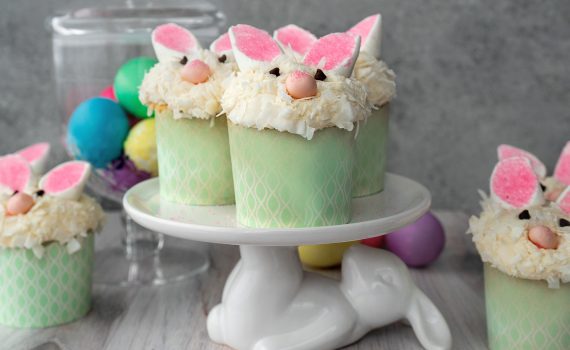 Bake yourself happy with Easter Bunny Cupcakes that are great to decorate with the kids. So tasty, you’ll want to have one (or maybe five).

2.) COMBINE butter, canola oil and sugar in a bowl of a stand mixer. MIX until well combined and creamy.

3.) ADD eggs, one at a time. MIX well after each addition. STIR in vanilla extract.

4.) WHISK together flour, baking powder and salt in a separate medium bowl.

5.) ADD buttermilk, 1/4 cup at a time, ALTERNATING with flour mixture and MIXING with large spoon until just combined after each addition. Do not over mix.

6.) DIVIDE batter between lined cupcake molds. BAKE for 18-22 minutes or until golden brown.

7.) REMOVE from oven and let cool on a wire rack.